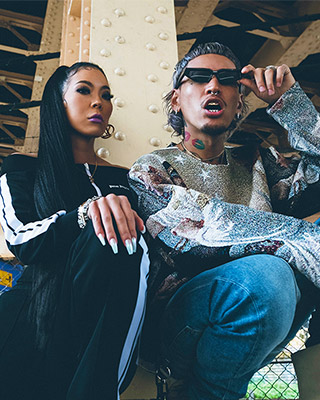 CREAM is a newly formed mainstream group, formed by singer song writer, Minami and rapper/track-maker, Staxx T. There sound is a fusion of POP, R&B, EDM, HIP-HOP also known as "NEW J-POP".
CREAM is known for many things including their DIY youtube channel "CREAM VISION", where they upload original songs, behind the scene & live footage as well as a wide variety of covers in Japanese. CREAM VISION has racked up over 30,000 subscribers and recorded a total of over 11 million views, which continues to grow daily.
They usually work together but they also work individually, writing lyrics and composing music for various artists including, m-flo, Namie Amuro, BoA, V6, MADEMOISELLE YULIA (KOZM ®), etc.
In August, 2012, the duo started a free download project "Tada Uta", on their official website where you could download CREAM's music for free by registering your e-mail address. Soon after, they released a digital EP in September 2012, CREAMIX VOL.1" and in October 2012, "CREAMIX VOL.2", which included songs that were popular in the "TADA UTA" Project. In September 2012, they also released "CREAMIX LIMITED EDITION" which received a lot of positive results from both there fans and new listeners.
There lead single "Shooting Star" was available for download on Jan .23, 2013 and there Debut Album "DREAMIN'" will be in stores on Feb. 27, 2013.

Staxx T – Rapper / Track-Maker "T'Z BEATZ"
Staxx T was born and raised in Osaka, Japan. He started playing the piano at a very young age and due to the influence of his parents he grew up listening to soul music.
Staxx T first came in contact with Hip Hop at the age of 15. Soon after, he started to self-produce songs and was featured in Hip Hop fashion magazine “TIGHT”. Apart from music, Staxx T modeled for Hip Hop fashion magazines such as “411”. In 2005, he entered a live battle contest, hosted/sponsored by DJ MASTERKEY/ Coca Cola and won No.1 in the MC/Vocal department.
His talent as a lyricist is highly acknowledged as he was offered to write lyrics for a wide variety of artists including TERIYAKI BOYZ®, V6, m-flo, etc.

Minami - Singer/ Song Writer
Minami was born in Hong Kong and raised in Kobe, Japan. Minami is bilingual and speaks both English and Japanese.
Minami's career as a song writer began when she received an offer from VERBAL (m-flo), who at the time was producing BoA's single, “BUMP BUMP! feat. VERBAL (m-flo)”. She took that opportunity to develop her skill as a song writer and continues to write for a wide variety of artists including Kylie Minogue, m-flo, Namie Amuro, BoA, etc.
Minami was also featured as a composer and vocalist by the TERIYAKI BOYZ® and m-flo.