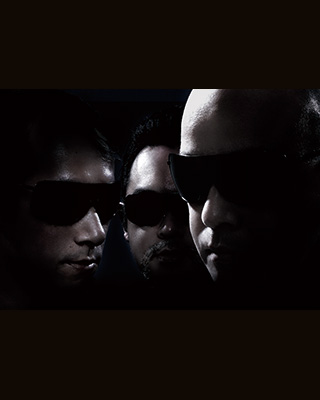 GTS is the house music unit which consists of three guys, GEE, TURBO and SATOSHI HIDAKA. This band, which had 10th anniversary in 2005,has improved along with Japanese club music scene, and now their playground is global from the US, Ibiza (mecca for clubbing) to Asia.
Their original tracks became some of the regulars in clubs and also their remixes have been heavily played. They produced major artists, such as m-flo, Ayumi Hamasaki, DOUBLE, SUITE CHIC, Namie Amuro, Mai Kuraki, BoA,Every Little Thing, Morning Musume, V6, move, MAX, Rena Katase and so on. Moreover,they made a song for SMAP and did a remix for "Saltimbanco". Everybody talked about them when they made a theme song for the biggest club/event space in Japan, "Shinkiba ageHa@STUDIO COAST" called "A Better World" which ageHa featured J. Brown & L. Holloway . (marked the 3rd position in American billboard magazine)
They were formed as a band under the concept "GROOVE THAT SOUL" in 1995. They mainly create house music by putting the soul diva "Melodie Sexton" together with different guest vocalists for each song.
Their debut piece, "Through The Fire" which was a cover of Chaka Khan, was a big hit. In 1996, they released 1st album called "GROVE THAT SOUL" which sold very well. "Share My Joy" in 2000 which featured "Loleatta Holloway" was on the Top 5 in American billboard club-play chart. In 2001, featuring the same artist, "What Goes Around Comes Around" marked Top 3 in the same magazine an accomplishment quite unlikely for a Japanese artist.They became known amongst clubbers worldwide.
They made a collaboration with Japanese representative singers,DOUBLE and Denda Mao happened in 7th album "POP+underground" released in March 2002. Also, form outside Japan, "Karyn White" participated in the album singing her own, incredibly emotional song "Superwoman"which marked the 6th position on American Billboard's club-play chart.
Moreover, in 2002 they featured DJ KENTARO (winner of the DMC World Finals) breaking boundaries between Hip Hop and House.
In December 2002, they released the 1st 'Best of' album called "GREATEST HITS & WORKS" including their hit tunes and remixed versions, past topresent.
In August 2003, released the 8th album called"CROSSOVER".
"CRAZY FOR YOU" which featured SILVA and the famous song of THE POLICE "Every Breath You Take" became instant club hits, and "CRASH" which featured OLIVIA, Singaporean New Star, moved people in the industry.
They collected their best tunes which they unfortunately couldn't fit on the Best album and made another compilation called"GTS CRUISING". In "electeque", released in March 2005, they did a cover of "Le Freak" by CHIC with Norma Jean & Luci M. (formerly of
CHIC) who they worked with before on their album called "LOVE UNLIMITED" in 1997. (marked at the 2nd position on American Billboard's club chart) GTS's house groove is the mixture of soulful and melodious songs, good select for songs to cover, and groove sense which they built through DJing.
The finest dance sound they create reaches way beyond Japan and finds its followers not only amongst clubbers but also amongst other music listeners who are showing a lot of support for this creative group.(2006.5.29)

GEE
Debuted as a DJ at a legendary club called "Boogie Night" at Shinjuku 2chome . After that he became a one night DJ for many famous clubs such as "Picasso", "Tool's Bar" and "GOLD". Especially in "GOLD", he was making the crowds go crazy with his cross-genre selection of House, Soul, Hip Hop and Rock. Nowadays, he mainly plays funky and electro-house music in Japan as well as in clubs in Miami, Ibiza, Korea, all over the world. Besides that, he's also a C.E.O for a management office called "ARTIMAGE" which represents m-flo, LISA, DOUBLE, Heartsdales, SOUL'd OUT, three NATION, faith, Ryohei amongst many others. He is one of the busiest producers in Japan.

TURBO
He debuted as a DJ in 1984. After that, he started playing with GEE as a DJ/production unit at "Boogie Night".
Then became busy guest-DJing in established big clubs in Japan like "GOLD". He attracted house freaks with his up-lifting hard-house sets. He plays in clubs in Japan, obviously, Miami, New York, Ibiza, Malaysia, Korea. He is a key person in today's club scene. He's also a remixer for Ayumi Hamasaki, Every Little Thing, Yokihiro Takahashi, Culture Club, HAL, hide (formerly of X JAPAN) , DOUBLE, m-flo,Gloria Gaynor, ageHa feat. J.Brown & L.Holloway, MAX and so on, and also manages a club called "RE:EDIT",

SATOSHI HIDAKA
His main influence was electronic pop music, and he started his musical carrier as a keyboard player in a band. Soon after, he found interest in contemporary, black music such as Hip Hop and P-Funk and started making soulfully arranged electronica. His music-making sense was widely commented and brought him producing, arrangement and remixing jobs from various, major artist like Every Little Thing, Ayumi Hamasaki, Namie Amuro, SMAP, V6, SUITE CHIC, YMO, Ann Lewis, Lyrico, DOUBLE, BoA, Sweetbox, Gloria Gaynor, ageHa feat. J.Brown & L.Holloway, MAX, EXILE, Kumi Koda, LISA, Heartsdales, Ryohei and so on. He has a significant role in GTS as a composer who can produce high quality sound.