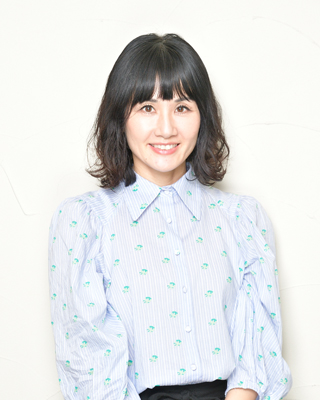 Favorite Word: Tomorrow is another day.

To be a singer has always been her dream, since the earliest days.

But when she asked "what I want to be" on a collection of compositions for graduation, she was too shy to write "a singer", so instead wrote a very common "nurse".

When she became a junior high school student, she formed a band. Her part was, of course, a vocalist. Around that time, she has started listening to foreign music.

The first artist musician she got interested in was Debbie Gibson (Lost In Your Eyes). This triggered her interest in American music making her regularly check and follow all the latest music from Bill Board Top 40.

She was getting into foreign music more and more and her dream of becoming a singer was becoming more and more serious. Through her acquaintance, she got to know people in the music industry, then started taking voice training lessons. The dream was slowly getting closer to become real. The voice trainer who was teaching her during that period supported her mentally and technically.

After her graduation and ・・・debut

She started digging her own roots, broadening her musical dynamic from her influences, exceeding genres and time.

While she was taking voice training, she worked part-time at a CD rental shop which gave her a great opportunity to encounter different kinds of music. Through that experiences, she discovered lots of music she hadn't known before and spent all her time with music.

One day at the shop, she came across 2 Albums, "Journey" and "Cicago", which opened a completely new world for her.

After that discovery, she started listening to 80s Rock music. She met a producers group called "ARTIMAGE" who produced "Groovy Boyfriend" and "move", when she was exerting herself to the utmost to be a singer.

One of the members of ARTIMAGE recommended her some CDs such as Boston and Van Halen and she got more attracted by melodious and groovy 80s Rock melodies.

The more voice lessons she took, the better her vocal skill became and she soon found a producer to make her debut song.

On 20th Sep 1997, she debuted with "Polastar − kimidake wo shinjite"and released second single "Climbing Wind" on 21st November of the same year. In December, she had the first live performance as a participant to LIVE/ GIRL POP at Nisshin Power Station. She released her first album "NATIVE SUN − Taiyo ga Umareru Basyo" on the 20th of June 1998.

So far, she released 5 singles and 1 album. Also, she had a regular radio program and her good talk, good instinct and comforting voice established her reputation as a radio personality.

At the moment, she is working as a personality who can stand artist side mainly at Bay FM.